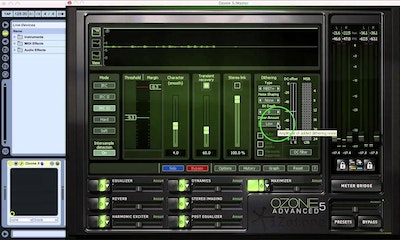 How To Use Limiters / Limiting Explained

Everybody seems to want to use Limiters, but only a handful of people go about it the right way. If you don’t know what you’re doing, using a limiter will likely do more harm than good. Want to know what limiting is, in which it differs from compression and how you should use it? Interested to find out what Gandalf the Grey and Limiters have in common? Find out in How To Use Limiters / Limiting Explained.

What Is Limiting And What Does It Do?

The word itself is a dead giveaway. With limiting, you’re – there it is – limiting the dynamic range of an audio signal. With dynamic range, we mean the difference in volume within a mix over a certain amount of time. It’s exactly like Compression, but without any trace of subtlety.

Traditionally speaking, a limiter is used as a safeguard against clipping, simply because it cuts everything below the set threshold. The below chart – courtesy of Practical Music Production – explains it quite well. 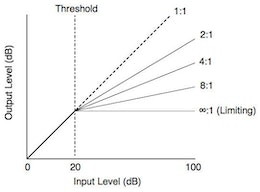 As you can see, it’s quite simple. If a threshold of 20 dB is set for the limiter, not even the tiniest of peaks will go past that level. This makes it the perfect tool to use when you don’t want your volume levels to go into the “red”.

What Is The Difference Between Limiting And Compression?

The above chart also shows us the difference between Limiting and Compression. The simplest answer to that question would be saying that they’re essentially the same, but there is one difference. And that difference lies in the ratio.

In the case of a Limiter’s infinite ratio, this would mean that the sound will be compressed so hard that not even a single peak is allowed to go past the set threshold, no matter how small or short those peaks may be. There’s no room for mercy. Think of Gandalf fending of the Balrog in The Lord Of The Rings. “You Shall Not Pass”. Gandalf is the limiter, the Balrog is your audio signal. Till here and no further.

When Do You Use Limiting?

When it comes to Limiters, most (up-and-coming) producers have only one reason for using one. They’ll tell you they want to use limiting – or have already done so – to make their mix louder. Now, with the loudness war in full effect and all, we get why. And it’s not even wrong to think so. But the danger lies in pushing your limiter too far.

Many people seem to believe that Limiters can only be used as a mastering tool, but this isn’t true. As a creative tool, a limiter can boost the perceived volume of a certain sound. It can also be used to restrain unpredictable effects or automated sounds that have too much dynamic range. You’d simply be using the Limiter as a heavy-duty Compressor (a Compressor with a very high ratio). If pushed even harder, it can even bring (groups of) sounds to the forefront of your mix, as long as you’re not using it on too many other sounds as well.

In mastering, the use of a Limiter is more straightforward. It’s all about increasing the perceived volume of the entire record. When your mix is well balanced, the only things that need cutting are the transients of sounds: small sound bites that aren’t even a fraction of a second long. If you set the threshold just right, the limiter will cut those peaks without any audible side effects, which is called Transparent Limiting. Of course, you’re free to push the limiter just a little further if that extra bit of pump is what you’re going for. Just know that if you push the limiter too far, you’ll end up with an inaudible mash of noise.

So Why Does Compressing Or Limiting Make A Sound Seem Louder?

But… that’s not louder. You’re right, it isn’t. The peak volume started out at 20 dB and has now been decreased to 18 dB. So, how do we go from an audio signal that’s even lower in volume to one that seems louder than before? This is where the Make-up Gain (or Output Level) setting comes in. 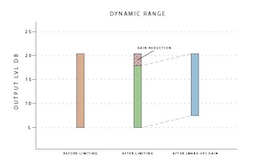 Essentially, this means that while the peak volume has remained the same, the quietest parts have become louder. So even though the sound itself hasn’t technically increased in volume, the average volume did. And our ears perceive this as the sound being louder.