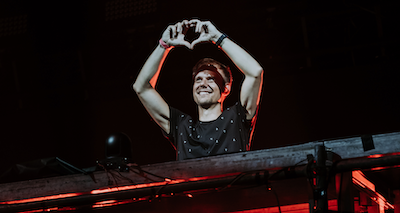 Oh, how time flies. Armin van Buuren's 'Balance' album celebrated its one-year anniversary this October, and we couldn’t just let that moment pass by unnoticed. So in addition to launching the album in a brand-new listening experience format called Dolby Atmos, we decided to put together a list containing the 10 most popular tracks from ‘Balance’ so you can all get lost in the incredibly diverse album again.

Armin van Buuren – Blah Blah Blah
Just like earlier tracks such as ‘Ping Pong’ and ‘This Is A Test’, ‘Blah Blah Blah’ started off as a bit of a gimmick. But when the track was premiered at Ultra Miami Festival 2018 in Miami, pretty much the entire world jumped onto the bandwagon. The iconic vocals of ‘Blah Blah Blah’ have since popped up in countless places across the globe, and the song was featured in cool projects such as the Netflix Original ‘6 Underground’, the Champions League 2018-2019 campaign of Dutch football club AFC Ajax and more.

Armin van Buuren feat. Josh Cumbee – Sunny Days
The summer vibes are strong in this one. With licks of pop, mesmerizing guitar play and the warm, welcoming vocals of Josh Cumbee, Armin van Buuren’s ‘Sunny Days’ proved the perfect summer anthem when it first popped up in June 2017. Whereas the song itself was written over the course of a vibrant multi-day studio session in Los Angeles, the music video of ‘Sunny Days’ was shot at a sun-laden sweet spot in Italy. And for those who’d rather embrace the cold of winter, there’s even a Christmas-themed version of the song called ‘Christmas Days’.

Armin van Buuren & Garibay feat. Olaf Blackwood – I Need You
‘I Need You’ was Armin van Buuren’s first pop-like single to emerge, and that musical adventure paid off big time. Made in collaboration with Grammy-winning songwriter and producer Fernando Garibay as well as singer Olaf Blackwood, the song racked up over 25 million streams on Spotify in its first six months and topped the Mediabase Dance Charts for several weeks. It is testament to Armin van Buuren’s unrelenting drive to explore his musical boundaries, which is why it fit so well on his ‘Balance’ album.

Armin van Buuren feat. James Newman – Therapy
“You look like ‘Therapy’, exactly what I need.” We reckon those lyrics have been emanating from your speakers countless times since its release back in April 2018. But did you know that the official music video of ‘Therapy’ is based on one of Armin van Buuren’s own life experiences?

It tells the story of his high-school crush, whom he has once fallen head over heels in love with. Combined with the shimmering beauty of Moroccan city Marrakesh through innumerable breathtaking shots and the gorgeous tones of the single itself, ‘Therapy’ quickly became the kind of record many fans can relate to.

Armin van Buuren – Turn It Up
Another surefire banger that caught the ear of many dance music fans. ‘Turn It Up’ followed on the grand success of mainstage anthem ‘Blah Blah Blah’ and was Armin van Buuren’s way to spice up the festival season. It was premiered to his fans during his ASOT 900 Utrecht sets and in his A State Of Trance radio show, and did exactly what its title implies: getting listeners to crank up the volume big time. In the words of Armin van Buuren himself: “Nothing beats the feeling you get when fans go absolutely nuts to something you play, and ‘Turn It Up’ was made for that exact purpose.”

Armin van Buuren feat. Sam Martin – Wild Wild Son
There’s no track that better illustrates the love between parent and child than Armin van Buuren’s collab with Sam Martin. Armin describes it best himself: “Many people ask me what songs of mine I’m most proud of. All tracks are my babies, but some tracks I just have more of a connection with, simply because of the time I spent on it or the emotion attached to it. In this case, ‘Wild Wild Son’ is about Sam Martin’s (then unborn) son. I fell so much in love with the song because I recognize the love I feel for my own son.”

‘Wild Wild Son’ was quite a bit different from Armin van Buuren’s previous work and a big step for him personally, which is why it resonates with his fan base so well. And as if that’s not enough, there’s a huge uplifting remix from Richard Durand that is definitely worth a listen too.

Armin van Buuren vs Tempo Giusto – Mr. Navigator
Armin van Buuren’s collab with Finnish Tech-Trance producer Tempo Giusto had already been bleeping on many a fan’s release radar through numerous live set inclusions when it finally popped up on his ‘Balance’ album. It didn’t stop there though, because none other than American dance music titan Steve Aoki steered the track in a direction of his own with his ‘I Am The Captain Now’ Remix. Whichever version you choose to listen to, it’s bound to ensure late-night floor-thrilling at maximum intensity.

Armin van Buuren feat. Conrad Sewell – Sex, Love & Water
Mirror, mirror on the wall, which track is the funkiest of them all? Armin van Buuren released his inner funk machine with ‘Sex, Love & Water’, a track that perfectly played into his love for exploring different genres and musical influences through catchy rhythm guitars, sexy horns and infectious grooves. He had been toying with the idea of doing something funky or disco-flavored for a while, and teaming up with Conrad Sewell and legendary producer Scott Storch made the dream work. On behalf of the entire dance music scene, thanks for giving us such an effervescent piece of music to sway our hips to.

Armin van Buuren feat. NE-YO – Unlove You
Easily one of Armin van Buuren’s eye-popping industry collaborations to date, ‘Unlove You’ with NE-YO was the final single to see release ahead of the full release of ‘Balance’. With killer vocals, pounding beats and recognizable lyrics that aim straight for the soul, the song underscores Armin van Buuren’s praiseworthy open-mindedness toward other genres and influences, which has really shined through in his music in the past few years. The mainstage-ready remix of Nicky Romero only adds to that.

These were the ten most popular tracks from Armin van Buuren’s ‘Balance’ album based on streaming numbers, but that’s not even half of the total amount of records featured on the album. There’s much more of ‘Balance’ to enjoy (such as ‘Show Me Love’ with Above & Beyond and ‘Always’ with BT and Nation Of One), so be sure to give the entire album a listen if you haven’t already. And if you want even more after that, there’s also an entire ‘Balance’ remix album waiting for you to press play.

Listen to 'Balance'
Drop your demo