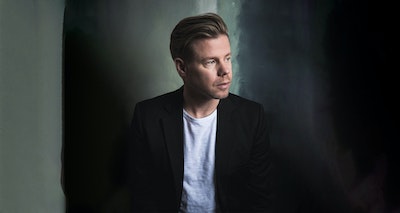 There's no denying the legacy of Ferry Corsten and his continued relevance in today's scene. With releases under his own name as well as ground-breaking productions under aliases such as System F, Moonman, Pulp Victim and Gouryella, the Rotterdam-born tastemaker has been on top of his game since 1999 and is not planning to retire any time soon. He just released his album ‘As Above So Below’ under his Ferr alias and issued another gorgeous new track as well: 'Tomorrow'.

Ferry Corsten's career is exemplified by his passion for music that keeps pushing the boundaries of the trance scene. His breakthrough album ‘Out of the Blue’ and his eponymous single gained global success, charting in U.K. Top 20 singles chart and Japan’s Top 10 singles charts for three consecutive years after its release. In 1998, he partnered with Tiësto to form the legendary alias Gouryella, a project he relaunched in 2016 with the immensely popular single ‘Anahera’ and a live show gracing the stages of EDC, Ultra, Tomorrowland and more. The Dutch DJ has played shows for hundreds of thousands of fans (sometimes at once) all over the world, from Russia to Ibiza to the United States.

‘Tomorrow’ showcases Ferry’s recent exploration into his love of orchestral and film music. After releasing the FERR by Ferry Corsten album ‘As Above So below’, he wanted to go back to the dance floor with a deeper track that carries over the intimacy from where he just came from. During an Armada Unites livestream, the Dutch DJ aired this tune in the midst of the Zaanse Schans, one of the most picturesque tourist locations in the Netherlands. The piece is uplifting, beautiful and very atmospheric. It brings hope in a time where we turn to music for inspiration.

There haven't been any hiccups in Ferry Corsten's creative flow, because you can expect a brand new single with Ciaran McCauley to drop somewhere next week. Make sure to follow him on Spotify, so you don't miss out!