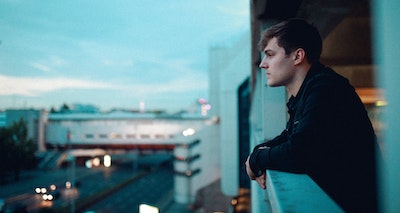 Today marks the release of Tom Gregory’s long-awaited debut album ‘Heaven in a world so cold.’ Curious about what to expect? Read on for all there is to know.

‘Heaven in a world so cold’ is an honest record, storytelling in its purest form, drawing inspiration from real-life relationships, the fear of getting old, growing up in a small town and his love for his guitar. Tom truly grabs his listeners’ attention in the shortest span of time. So we got a little curious and asked him about it.

What kind of music inspired you at first?
"I used to listen to lots of guitar music and my dad was a big inspiration. He introduced me to artists such as Kool & The Gang and James Taylor. Modern music wasn’t my thing, I preferred artist like them whereas my mates were all into Eminem."

The track 'By Your Side' reflects on your small-town upbringing. Could you explain a bit more about that?
“I grew up in Blackpool, which is a really small town on the northern coast of England. The track ‘By Your Side’ really pays tribute to how I grew up, met my first love there, and went through the roller coaster of emotions that comes with being a teen. It’s actually one of the first songs that I wrote for this album and one I’m really proud of!”

There’s a new single that will accompany the album release. Can you tell us more about ‘What Love Is’?
“I really wanted to capture a classic love song and strip everything back. I actually think this turned out to be one of the most beautiful on the record. It was a really nice change for me to strip everything back and take away a lot of the big productions that run through the whole album.”

‘Grow Up’ is about the fear of growing old, something we all experienced at some point in life. When was that for you or are you still experiencing it?
“I was going through a period in my early 20s where I was really scared about the idea of getting old and having responsibilities. I really wanted to put that idea into a song, how actually growing up can really suck sometimes! I’ve now happily embraced that I’m getting older though!

What’s the story behind the track ‘Sink or Swim?
“This track I think is probably the most honest on the whole album. I went through a really tough break-up at the start of 2020, which left me very lost and confused. Someone leaving you behind can be one of the most painful things you ever experience! This song pretty much wrote itself.”