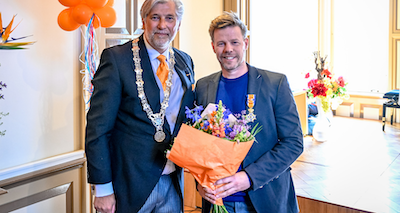 Ferry Corsten has been honored by the Dutch Royal family for his outstanding contribution to the country’s music scene, both at home and internationally. King Willem-Alexander appointed the electronic music pioneer as Officer in the Order of Oranje-Nassau on Tuesday, April 26 during a surprise ceremony in Ferry’s hometown, Capelle aan den Ijssel.

“I was not expecting this at all and I’m still in shock”, Ferry Corsten says. “To keep me off the scent of this award, my wife Lia told me we would view a venue to redo our wedding vows. So, you can imagine my surprise when I discovered I was being appointed ‘Officer in the Order of Oranje-Nassau’ by the Dutch Royal family! It was also touching to hear that my father was the one who initiated this, and that he received many letters from various people in the industry supporting the nomination.”

On stage, Ferry Corsten, visibly stunned, said, “I can’t put into words how much of an honor being presented with this award is for me as a passionately proud Dutch native and an artist who just wants to share all the beautiful sides of dance music with the world. To be recognized by the Dutch Royal family means so much. Thank you!”

The Order of Oranje-Nassau is a civil and military Dutch order of chivalry founded on April 4, 1892 by the Queen regent Emma. Individuals appointed as Officers have generally rendered outstanding service of national or even international importance and deserve appreciation and recognition. The order is comparable with the Order of the British Empire in the UK.