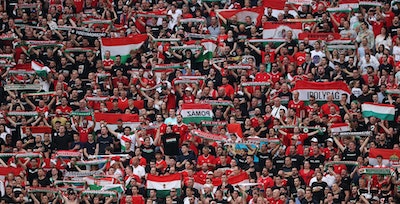 Football and music have always gone hand in hand. So with international football now taking over TV screens across Europe, it’s no surprise that music isn’t far behind. We put together a selection of our favorite songs that are tightly linked to an international side and the supporters behind it, so pull on your team’s jersey, get your flag flying and turn the volume all the way up for our top football anthems!

Artemesia – Bits And Pieces [Scotland]
The Proclaimers’ classic ‘I’m Gonna Be (500 Miles)’ used to soundtrack the successful goal attempts of the Scottish national team, but this all changed when the Scottish Football Association held an online poll. The guitar anthem of Edinburgh duo Charlie and Craig Reids ended up getting benched and Artemesia’s 1995 rave favorite ‘Bits And Pieces’ took its spot, receiving a huge 49% of the vote. You’ll almost certainly be able to hear the Scottish supporters singing this anthem on a good day, or after The Tartan Terriers slot in any of their upcoming fixtures.

Armin van Buuren – We Are Here To Make Some Noise [The Netherlands]
Queen’s Day (now King’s Day) in the Netherlands has always been a massive celebration, with the entire nation celebrating the birthday of the Queen with a day off work and fun activities. Armin van Buuren’s ‘We Are Here To Make Some Noise’ was released to not only supercharge this annual highlight, but also to celebrate the national side entering the UEFA 2012 competition. The song became an anthem for the Dutch’s run through the group stage, and although the music alone unfortunately wasn’t enough to secure the team’s place in the finals, it gave fans an excuse to pump their fists in the air and make noise regardless.

Endor/Got Some - Pump It Up [Leeds United]
After sixteen years spent out of the Premier League, The Whites worked through a switch of ownership, appointed Marcelo Bielsa as manager and adopted a new strategy, gaining a new lease of life and a massive boost back into the top division. Leeds United finished 7th that season, ensuring an extraordinary turnaround for the club. Supporting this was Endor/GotSome’s massive ‘Pump It Up’ chant, which echoed around their home ground of Elland Road with the altered lyrics ‘You’ve got to pump it up/The Whites are going up’. With the energy that surrounds these two tracks, it’s no surprise that the football stadium was and still is the perfect place to belt out the timeless vocal melody.

Superlover – Whoomp! [Various]
This rework takes its core structure from the ‘90s rap duo Tag Team’s anthem of the same name. Not only has the track been played on countless TV shows and receiving various film credits, it’s also widely considered as one of the all-time top tracks for sporting events, included among the top walk-up songs of the MLB (Major League Baseball) and the biggest arena anthems of the NBA (National Basketball Association). For football, the call and response in this track is perfect for bouncing around stadiums and can be heard echoing around football grounds with its classic vocal hook.

Tinlicker & Helsloot – Because You Move Me [Germany]
Following the use of the Armada Electronic Elements track in a video on the German football team’s official Instagram page, the melodic team-up of Tinlicker & Helsloot is resonating extraordinarily well with many a football fan, especially since the emotionally charged lyrics can be considered a metaphor for a beautiful game.

Armin van Buuren – Blah Blah Blah
Another sports anthem from Armin van Buuren is ‘Blah Blah Blah’, most notably used by Dutch champions Ajax. The Eredivisie side not only used the song to soundtrack their incredible Champions League run in the 2018-2019 season, but also played it before home fixtures at the enormous 55,500-capacity Johan Cruijff ArenA and when lifting the national trophy in 2019 after winning their 24th league title, celebrated in our home of Amsterdam.

We’ve added all our top tracks for the competition to the designated EURO2020 playlist. So no matter which nation you’re rooting for, we’ve got the tracks to get you singing and help you get behind your team! Find the EURO2020 playlist here.